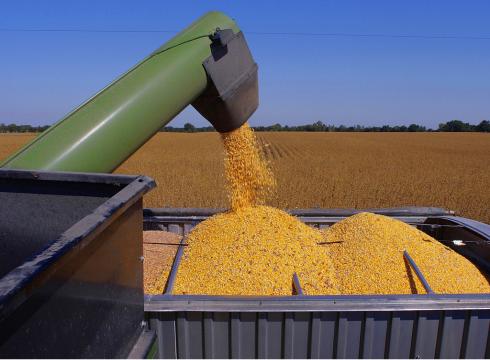 The U.S. Department of Agriculture on Wednesday upwardly revised its outlook for domestic corn supplies by 25 million bushels, more than analysts were expecting, due to weakening export demand.

U.S. stockpiles of soybeans and wheat were left unchanged, the government said in its monthly supply and demand report.

The market shrugged at the data, however, with Chicago Board of Trade corn <0#C:> and wheat <0#W:> futures remaining firm. Soybean prices <0#S:> turned lower briefly before returning to positive territory.

“I think most people were looking for the loss in (corn) exports to offset a gain in ethanol demand, and it looks like USDA went a little more aggressive with their cut in corn exports and a little less aggressive in their ethanol usage” increase, said Jim Gerlach, president of A/C Trading. It is “not even close to being a game-changer though,” he added.

On the global front, USDA raised its outlook for world ending stocks of wheat above market forecasts, largely due to increased production in Canada and the European Union.

World ending stocks of wheat were seen at 229.86 million tonnes, up from 227.30 million tonnes in November and above the range of analysts estimates.