See how  much Biosev expects to harvest with new equipment

The expectation of Biosev is to end the season 15/16 crushing 32 million tons, compared to 28.3 million tons the previous season. The increase in reflects the agricultural investment, and also investments  in new machines.

This week, Biosev will receive 15 new harvesters Case IH 8800 Tracan. And with the machinery in the field, in the latter two months of the season 15/16, the sugarcane company expects to exceed 83.7 tons of sugarcane per hectare, its current number.

According to a spokesperson of the supplier of the harvesters, the investments of the sugarcane company in the machines are part of the US$ 226 –million-investment made by Biosev in the harvest in progress.

Almost half of this amount was invested in agriculture to renew sugarcane fields with more productive cane varieties, soil fertilization, in pest control and in machinery and equipment. 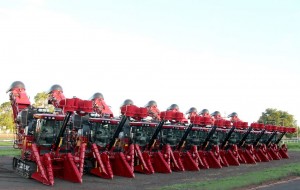