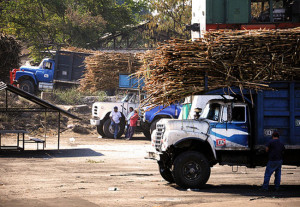 According to Manuel Enriquez Poy , director of Atam – Sugar Technical Association of Mexico , through the new Pronac – National Program for Agribusiness of sugarcane, there is the possibility that surplus sugar mills production be used to make alcohol. ” If that happens , it will be eventually. Our, future is uncertain due to lack of infrastructure. So, that the current problems for the production of ethanol in our country are linked to the high cost of sugar from sugarcane production. We expect the Mexican government to give greater incentives to produce, as in other countries, at least to start new projects for the Mexican sugarcane industry, “says Poy.
On the Mexican industry , , in this country : La Gloria and St Nicholas , with dehydration technology through molecular sieve and cyclohexane .
An external distillation units using a system of extraction by diffusion, produces on average 100 liters per day. There are other distilleries processing molasses, located outside the plants.
A distillery located in the state of Sinaloa was installed to produce ethanol from corn, but is not active.