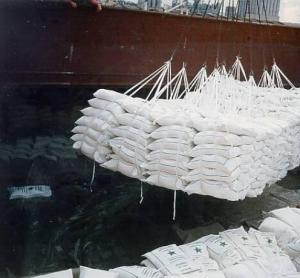 China’s sugar imports in September soared 80.1 percent on the same month a year earlier to 660,000 tonnes, customs data showed on Wednesday, as a big gap between domestic and overseas prices encouraged buying.

But traders said that up to half of the sugar may end up in bonded warehouses, after many buyers failed to get permits to clear customs.

Buying by the world’s top sugar importer has surged 55.2 percent in the first nine months to 3.73 million tonnes on the same period a year earlier.

With Chinese sugar prices propped up by government-set cane prices and government restrictions on imports, buyers have consistently made more than $200 per tonne on overseas shipments for much of this year.

That has fuelled buying well ahead of real demand, with substantial commercial stocks still available and sluggish sales to the food and beverage sector owing to a slowing economy and cooler summer temperatures.

China last year introduced a registration system requiring sugar buyers without a low-tariff quota to get permits in a bid to protect its domestic industry.

There is no data available on how much sugar has entered the bonded zones so far this year, but trade sources believe it could be between 500,000 and 800,000 tonnes.

About half of the September arrivals may end up in bonded zones, said traders, as Beijing tries to limit 2015 imports to 3.8 million tonnes.

That could act as a lid on buying in 2016, some said, curbing the demand enjoyed by top exporters Thailand and Brazil for much of this year.

Buyers expect to eventually get permits next year to bring the sugar into the country but that could reduce available permits for new shipments in 2016, said one trader who declined to be identified.

“If this sugar is not custom-treated this year, it will be counted in next year’s quota, and that means China won’t be buying as much sugar next year,” he said.

Actual imports would be similar to this year, added another trader, at around 4-4.5 million tonnes.

Others, however, said that imports may continue to surge if prices keep rising.

“If refineries expect next year’s international prices to keep rising, then they will of course keep buying,” said Tao Qiujun, an analyst at Chaos Ternary Futures.

Meanwhile, a large portion of imports could continue to be held in bonded zones.